Eleven people and two dogs met up with the arranged blue badge guide at the historic 12th Century Norman Bargate, once the northern entrance to the medieval city of Southampton.
In the area the city was preceded by a Roman settlement of Clausantum on the northern banks of the river Itchen and the Anglo Saxon settlement of Hamwick, which in 635 was the first Christian settlement in the area, of which the parish church of St Mary’s is a later and remaining symbol. East Street, leading out of the city walls to the river is said to be the oldest existing street in the area.

A walk along the northern walls and footbridge brought us to the castle, of which we visited some of the remaining vaults, which were important for storing the wine brought in from Angevin Bordeaux, one of the regular imports for the English court. The 14th century Western wall with its regular ‘loops’ for bowmen is still intact and still has an original toilet: A flush gate from which the double tide removed all the excrements.

Within the city the oldest church of St Michael’s remains, as do some of the medieval houses that remind of the flourishing port business that defined life within the city walls.

Inside the city the effect of patchy bombing during WW II was pointed out in the high street where several historic buildings survived the bombing raids and other buildings in between those did not.

New housing has replaced much of the slum type habitats where seamen and workers used to live and so did the many lanes and side streets like Juniper Lane.

We are looking forward to a next trip to visit the Easter part of the city, hopefully with the same dedicated guide.

We finished the walk off with lunch and beer at a new discovery for us: the Platform Tavern.

A big thank you to David Palmer for organising this event. 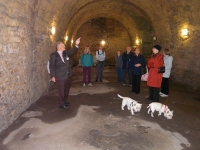 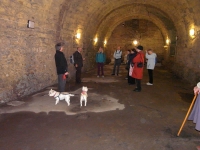 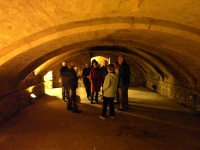